Is your flour non-GMO?

Please be assured that Breadsmith’s flour, along with all other wheat flour in the United States, is non-GMO. Currently the United States Department of Agriculture confirms there is no GMO wheat being commercially grown in the United States; therefore the flour produced from US wheat stocks is also non-GMO. Because of this fact, official documentation is unnecessary, and therefore, unavailable.
As of late, there have been many articles and books written about the difference between modern and ancient wheat and how it has changed. The following are some important facts to consider:

In the 50’s and 60’s a gentleman by the name of Norman Borlaug figured out which wheat plants grow best in which areas and which farming techniques to use to improve the wheat crop yields. This was called the “Green Revolution,” and so dramatically increased the crop yields that Borlaug was credited with saving a billion lives in the fight against world hunger and was awarded the Nobel Peace Prize.

The wheat plant wasn’t genetically modified; it was the evolution of cross breeding of the different strains of the plant and growing them in a climate that best suits them. 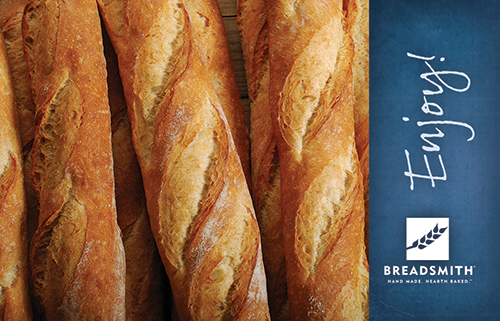 Breadsmith Gift Cards. The perfect gift for all occasions!

Sorry! No nearby available locations were found. Please try a different address.